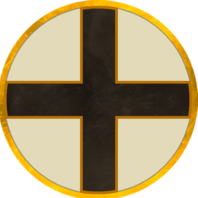 The Heiliger Kreuzzug; based at the Crusader State of Winterthorn to the far north, led at the helm by a blessed of Sol named only Ludwig- his experience and leadership has brought the Crusade to the North to fight and purge the profane; acknowledged and sanctioned by Sol himself. Their faith maintains its helm as Sol, but many Knights follow other deities as per their personal aspiration. Such is that they are famous for military style of government- lacking the matter of traditional organization in favor of a theocracy most fundamental in style. This however does not limit their involvement in trade and commerce however- being a northern pitstop before traveling further and so on. One must be vigilant, for there are signs of war brewing; war against the Profane.